My Unique Definition of Street Photography

Central Asia, . This was an environment of uncertainty and fear of future as the region was gradually declared independent of the USSR.

One would think being released after almost 70 years of repression and unprecedented control would be welcomed with open arms and celebrations. The reality was quite the contrary as the general public did not know what this was. From previous experience, any major political change would mean more repressions and examples to be made to show who is in control, however, this time people could feel something was different. This was not a typical calm before the storm, it was just… not being needed anymore and forgotten.

I am not sure about my other “comrades”, but I owe this brief crisis a great deal on how it would shape my future. In the West and East, people have an image of the Soviet Union as grey, standard four story flat blocks with windowless concrete government buildings; communists religion and tradition, that know only to worship their seniors and work like zombies with obedience. Well yes, it probably was like that as I grew up myself in a grey four story flat, but as I did not experience it myself, I don’t know how people lived before the independence. I remember my parents mentioned a few times to me that whatever ideology was creeping in my head had to stay there. Your tongue and limbs had to do what they were told. They might have been talking about Stalin times, so I am not so sure if it was anything similar to the 'Iron Curtain' we all know about. All I know is that thanks to religion, tradition and knowing who you are, where you come from is not so easy to forget. You can make your own mind up on this.

In any case, people started to revive their religion and tradition. No longer was there a communist idea of being the same as everyone else in every possible way. People started to diversify and have thoughts that they could action upon. Some people liked to work and study, while others liked to stay at home, drink tea and go for a Friday prayer. This allowed me to see both sides of the as if I was sitting on the Berlin wall. Crumbling soviet buildings still remain, but now only serve the purpose of being a reminder of the past. To me, they are like a smoked cigarette forgotten under the sofa. Dirty, but no one bothers to clean it and pretends like not there. 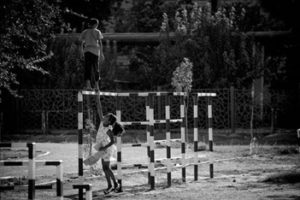 I loved paintings as I grew up, but could not paint myself. I knew the techniques, however, my hands were telling me off every time I picked up a pencil. So until the age of camera phones arrived, I only had my paintings inside my head. Now, I am in London working my way through capitalism, making a living, the
same as everyone else. I still had a huge interest in photography when I came to London, so I started to save money to help buy my own camera and started to research different styles that would suit me. After some time, I realised documenting ordinary life was the best way to go and improve my skills. You probably realise that I'm talking about street photography. But am I? Is there a real definition? I think it is impossible to define street photography, because, it's about what thoughts, ideas and emotions you have in your own head. Now, if you have never taken a street shot, then you might be thinking I'm mad. Yes, you have to be a bit mental to take street shots. Bear with me and I will explain. Second post to follow this week.