I blame Bill Gates. Someone has to be responsible.

Throughout the latter half of the twentieth century, Helvetica was one of the most popular typefaces around – it had the lot: style, class, elegance.

Helvetica was probably the first universal typeface and could be spotted in most environments from big businesses to transport, to clothing and then to luxury brands. A film was made detailing its popularity and usage. Helvetica was voted “Best Font of All Time” by a German foundry. Everyone was happy. Well, almost everyone: a predator was lurking…

The Microsoft Corporation needed an alternative to shelling out licensing fees for using Helvetica on their Windows Operating System. So, in 1990 the font Arial was born as an alternative – some would say imitation – to Helvetica. While the two fonts look similar, there are subtle, but key, differences. The was that the font characters for Arial were exactly the same as Helvetica’s, meaning one could be substituted for the other with minimal risk of text reflow. That move was not well received.

Here’s the paradox: Helvetica is popular and people love it; Arial is more popular and is loathed. It’s all about the “imitation” factor – you would be amazed at the bad blood that can be generated within refined typographic circles about “clone fonts”. As a taster, go to and enter “Font Fight” by “College Humor” – it’s a between two rival gangs (Helvetica v Arial) and respective Arial is now probably the most widely used and second most derided typeface in the world. Arial is everywhere, there is no escaping it.

The Medium Is In The Message

At ICP I work on the Avon account and use Arial all the time. The fonts’ weakness and pervasiveness is its strength. Our need to create text in a myriad of foreign languages – Turkish, Greek, Czech, Serbian, Russian, and more – with the associated accents – calls for a typeface that covers all bases. If a foundry is going to cut the necessary accents for such wide use, they need economies of scale. That calls for Arial. It might be derided, hated by some, but we cannot do without it.

I suppose I am what you might call a Type Geek. No trip on the Underground is complete without me taking an opportunity to admire the classic quality of the fonts on tube maps (Johnston Sans); a trip to the City of London leaves me at the refined street signs (Albertus). 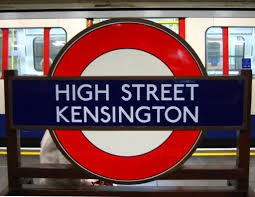 Equally a trip to upmarket High Streets leaves me scratching my head at what “Patisserie Valerie” were thinking when they commissioned their art nouveau style (Arnold Böcklin) for their branding; it might look odd, ugly even – but it is distinctive.

To borrow a famous phrase – The Medium is the Message:  How type is used says a lot about a company or organisation and the message it seeks to convey. EasyJet, for instance, and their use of Cooper Black: The font might not be everyone’s cuppa', but it has a certain retro, even kitsch, appeal. When combined with its corporate orange colour, (PMS021C) you are left in no uncertain manner who are you dealing with and what they are trying to say – “We’re fun and friendly. So, hey, let’s fly to the Costa Brava”.

So, if Arial is the second most hated font:  what is number one? That’s easy: Comic Sans. It’s more a case of the font’s inappropriate use, such as on the front page of the Sydney Morning Herald. It might be suitable for a child’s party invitation, but not much else. There has been a campaign to have Comic Sans banned. The argument that a typeface should match the tone of its and that its misuse is a disservice to the art of typography "analogous to showing up for a black tie event in a clown costume”.

Endless Fonts To Choose From

The assembly of used to be the preserve of craft professionals. was assembled in large frames; It originating from large cumbersome trays or racks, each containing lead characters in a given size and style. If the size was not correct, or typeface not appropriate, well it was simply a question of starting again. Those days are long gone and an operator has immediate access to thousands of fonts to choose from – and the choice can be bewildering. In typography, as with any form of design, there is no absolute right or wrong, it’s about what works. If you are producing for a solicitor or Accountant, you are probably going to need something conservative and respectable: Bembo or Baskerville for instance. A building company needs something solid and sturdy, Rockwell or Stymie perhaps; whilst a tech company might need something with sleek, geometric lines: Syntax or Futura perhaps.

The options can be endless – baffling, but there are some universal truths to fall back on. Your starting point will normally be: serif or sans serif font? Serifs are small lines attached to the end of a stroke of type Times Roman is probably the example of a serif font (the bookseller Waterstone’s use Times Roman with a large serif “W”). Arial and Helvetica are sans serif fonts. Sans is French for “without” – so sans serif, translates as “without serif”:  get it?
Generally speaking, large blocks of text call for serif fonts –refer to a long newspaper article or novel and you will see what I mean. The rationale being that the serifs aid the reader’s eye and to increased concentration; Sans serif fonts are felt to have too many similarly shaped characters. The reverse is true for smaller items or headlines, which normally use “sans” type. Sans serif is trying to grab your attention, while the “serifs” are designed to keep you hooked. That’s the theory anyway, but if all else fails, you can also fall back on hardy perennials – Times, Helvetica or even, dare I say it, Arial. But not Comic Sans. Please.